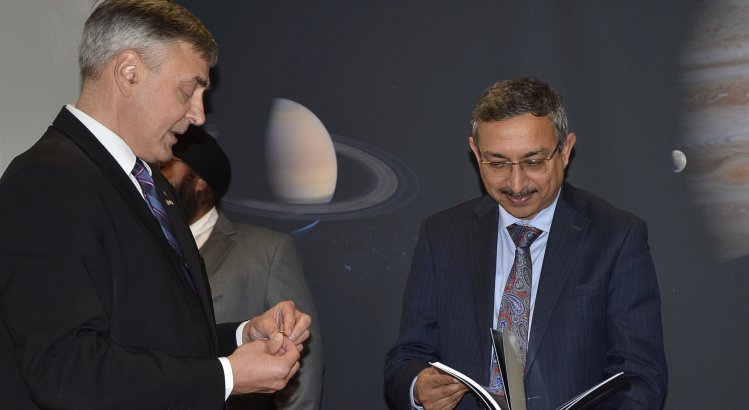 On September 14 the Indian Ambassador Mr. Tanmaya Lal visited the Swedish Institute of Space Physics (IRF) in Kiruna. The ambassador was informed about different collaborations between IRF and India in space research (since 1999) and atmospheric research (since 2005). During the visit, the Ambassador also got to see the IRF research facilities.

Current activities in collaboration between IRF and India is the Moveable Atmospheric Radar for Antarctica (MARA), joint data analysis from the ESA’s Aeolus satellite and the IRF contribution to the upcoming Indian satellite ISRO Venus Orbiter.

The first collaborative project between IRF in Kiruna and the Indian Space Research Organization (ISRO) was the SARA experiment (Sub-keV Atom Reflecting Analyzer) on the Indian satellite, Chandrayaan-1. The satellite was launched to the Moon 2008.
More information

IRF in Kiruna will contribute with the instrument (Venus Neutrals Analyzer – VNA) to the satellite ISRO Venus Orbiter that will be launched to Venus. The instrument is part of a larger Indian instrument package.
More information

When it comes to atmospheric research IRF has collaboration with National Center for Atmospheric and Oceanic Research, (NCOAR) of the Cochin university since 2005.

The Moveable Atmospheric Radar for Antarctica (MARA) was built by IRF and installed at the Swedish Antarctic Wasa station on 2007.

During 2014 MARA was installed at the Indian station Maitri by IRF staff members in collaboration with NCAOR and 2017 IRF transferred the ownership of MARA to NCAOR, India, where it now is maintained with technical advice from IRF.