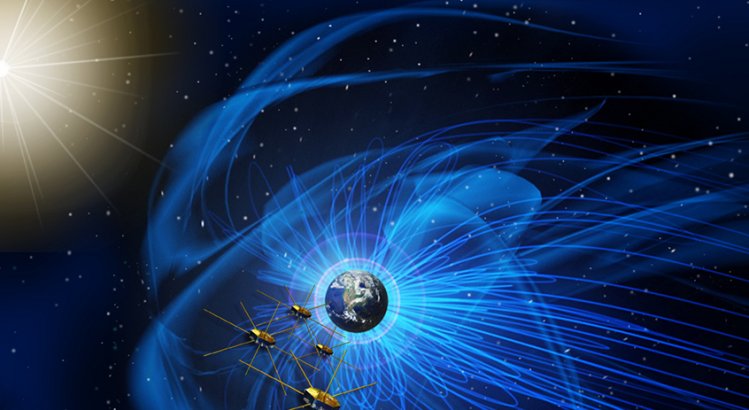 Research to be published today in the respected journal Science presents observations made by NASA’s four Magnetospheric Multiscale (MMS) satellites in the Earth’s magnetotail. Two scientists from the Swedish Institute of Space Physics (IRF) in Uppsala are co-authors of the article. The lead author is from the University of New Hampshire in USA.

Magnetic reconnection is an energy conversion process important in many astrophysical contexts including the Earth’s magnetosphere, where the process releases the energy powering the auroras. The article presents the first encounter of a reconnection site by the MMS spacecraft in the magnetotail, one of the few regions where the process can be investigated by satellites in-situ. The unprecedented electron-scale plasma measurements revealed super-Alfvénic electron jets reaching 15,000 km/s, electron meandering motion and acceleration by the electric field. Despite the presence of turbulence near the reconnection site, the well-structured multiple layers of electron populations indicate that the key electron dynamics appear to be largely laminar.

The magnetotail reconnection electron diffusion region differs from that on the dayside as it involves symmetric conditions on both sides of the reconnecting current sheet. MMS determined the aspect ratio of the diffusion region (0.1-0.2), which is consistent with predictions for fast reconnection. The MMS observations of electron dynamics in the diffusion region match predictions made by one class of theories and models – nearly laminar ones that assume the effects of turbulence and associated fluctuations on the electron dynamics are small. Electrons can be accelerated up to three successive times by the reconnection electric field, possibly as a consequence of longer confinement in the symmetric magnetic structure. Taken together with MMS observations at the magnetopause, these results provide confirmation that reconnection is an efficient mechanism for the release of magnetic energy, for both geomagnetic substorms and auroral phenomena.

“The magnetotail plasma sheet is one of the hottest places in our solar system, with plasma temperatures reaching 100 million degrees”, says Yuri Khotyaintsev of the Swedish Institute of Space Physics. “Reconnection is one of the key processes involved in heating the plasma. The new MMS measurements help us to understand how the plasma particles and in particular electrons are accelerated during reconnection.”

A graphic visualization of magnetic reconnection. The blue lines surrounding Earth represent the magnetic field lines of the magnetosphere and the bright point indicates the moment of reconnection. Image: NASA/Goddard Space Flight Center.

Article:
R. B. Torbert et al., “Electron-Scale Dynamics of the Diffusion Region during Symmetric Magnetic Reconnection in Space”, to be published in Science on 15 November 2018.

Created by Rick McGregor at 2018-11-15
Last modified by Annelie Klint Nilsson at 2019-10-18
This website uses cookies to improve your experience. We'll assume you're ok with this, but you can opt-out if you wish. Accept Read on
Cookies Policy