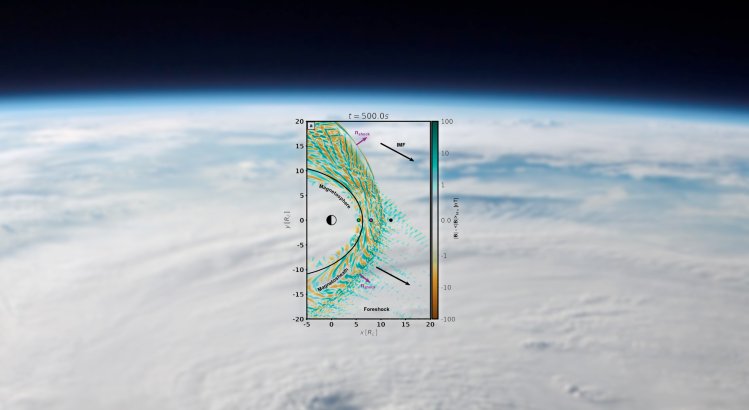 An international team of scientists led by Lucile Turc from the University of Helsinki has used simulations and satellite observations to explain the propagation of foreshock waves to the magnetosheath. Andrew Dimmock and Andreas Johlander are researchers at IRF Uppsala who participated in the study.

The Sun continually emits a supersonic stream of charged particles. When this stream of plasma encounters the Earth’s magnetic field, a shock wave is formed that slows, compresses, and heats the plasma. This shock is known as the bow shock, and it differs from atmospheric shocks in that any collisions between particles are so rare they can be ignored.

The bow shock can be separated into quasi-parallel and quasi-perpendicular regions depending on the direction of the magnetic field frozen into the solar wind plasma. In the case of the former, particles reflected from shock interact with the solar wind traveling in the opposite direction, causing waves and complex structures to be generated in this specific region upstream of the bow shock. This region is known as the foreshock and provides a warning to the solar wind of an impending shock crossing.

Although there are an array of waves and structures inside the foreshock, 30-second waves are frequently observed by spacecraft. Interestingly, waves with periods around 30 seconds are also observed inside the magnetosphere much closer to Earth. In fact, such waves have even been measured on the ground by geomagnetic observatories, suggesting they may play a role in space weather. Until recently, the physical process of how these 30-second waves are transmitted through the bow shock and reach these other regions was unknown.

Using Vlasiator (a state-of-the-art magnetospheric model developed at the University of Helsinki) simulations and observations from NASA’s four MMS satellites, a mechanism to explain this transmission process was revealed. The authors discovered that the interaction between these foreshock waves and the bow shock can generate earthward fast-mode waves that reach the magnetosphere. Thus, answering a decades-old open question.

The results of the study are now published in Nature Physics in an article entitled “Transmission of foreshock waves through Earth’s bow shock ”. The article is freely available (open access) from the Nature Physics webpage: https://www.nature.com/articles/s41567-022-01837-z