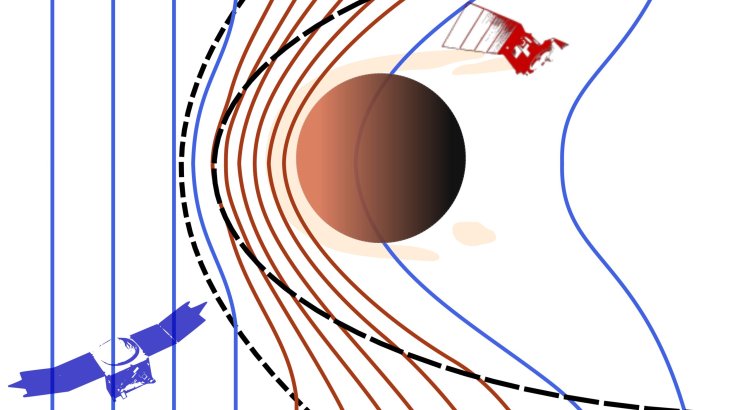 On the 27th of September, Katerina Stergiopoulou, Swedish Institute of Space Physics (IRF) and Uppsala University, will defend her doctoral thesis. New results about the physical processes taking place in the induced magnetospheres and magnetotails of Mars and Venus will be presented.

Mars and Venus don’t have a planetary magnetic field like Earth does. Consequently, there is no magnetosphere of a planetary origin around them. Because of the stream of charged particles that constant flows from the Sun, the solar wind, these two planets are surrounded by induced magnetospheres. Due to this lack of global planetary magnetic fields at Mars and Venus, the solar wind, directly influences and shapes their plasma environments.

Katerina Stergiopoulou has analysed measurements from ESA’s Mars Express and NASA’s MAVEN missions to examine the plasma environment of Mars and how it is affected by the solar wind conditions.

She observed for the first time through special operations in an uncharted region, plasma at the optical shadow at high altitudes, indicative of consistent paths of plasma transport from the dayside to the nightside ionosphere.

“Mars Express and MAVEN are two long-lived successful missions that have considerably contributed to our understanding of the Martian system. After all these years of observations there are processes yet to be explained though, making evident the need for new missions, says Katerina Stergiopoulo.

Observations from these two Mars missions allow Katerina also to track the relative expansion and compression of the induced magnetosphere and estimate the range of the length scale to which the magnetic field lines that pass through the dayside ionosphere extent in the magnetotail.

Recently, Solar Orbiter’s Venus flybys provided us with a rare set of observations from the distant induced magnetotail of Venus.

“Thanks to Solar Orbiter’s flybys, we have a unique opportunity to witness escaping plasma and the behaviour of the magnetic field in the induced magnetotail, at great distances from the planet, where our access is limited, says Katerina.’’

Katerina Stergiopoulou defends her thesis “The induced magnetospheres and magnetotails of Mars and Venus’’ at 09.15 at the Ångström laboratory in Uppsala. The opponent is Professor Lasse Clausen from University of Oslo.

Link to the doctoral thesis