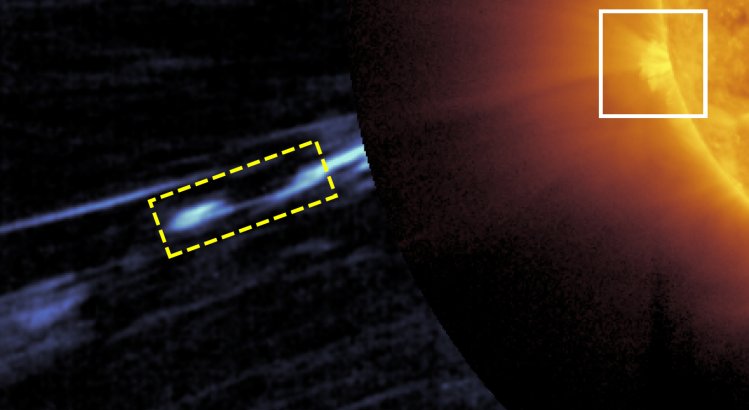 Solar Orbiter has observed for the first time a solar magnetic switchback – a sudden reversal of the solar wind’s magnetic field. Luca Sorriso-Valvo, scientist at the Swedish Institute of Space Physics in Uppsala is part of the international team that performed the observation in the solar corona.

On 25 March 2022, Solar Orbiter was orbiting near its closest approach to the Sun, right beyond the orbit of Mercury. One of the scientific instruments onboard Solar Orbiter, the coronagrapher Metis, was obscuring the solar disc to obtain a map of the density of electrically charged particles flowing away from the Sun that compose the faint solar corona. The density also represents a good visualisation of the coronal magnetic field structure.

A series of images taken by Metis were carefully analysed to highlight the emergence of a short-lived, S-shaped structure that was propagating out of the Sun. Detailed analysis and comparison with numerical models confirmed that the observed structure was indeed a magnetic switchback.

Magnetic switchbacks are thought to be an important ingredient to explain the mechanisms that accelerate the solar wind away from the Sun, generating turbulence and heating the plasma in the interplanetary space.

“This observation and result will help understanding the highly debated origin and evolution of magnetic switchbacks, a phenomenon that spacecraft instruments have measured in situ for decades, but still poorly understood. We hope to be able to observe other similar structures soon to unveil their nature”, says Luca Sorriso-Valvo who is one of the authors of the article that now has been published in The Astrophysical Journal Letters.

The observation of a switchback inside the solar corona suggests that these structures are likely formed near the Sun, thus providing important constraints for theories and models of their origin.

The result was published on September 12 in The Astrophysical Journal Letters:
Observation of a magnetic switchback in the solar corona by D. Telloni et al.
DOI 10.3847/2041-8213/ac8104

Link to the article