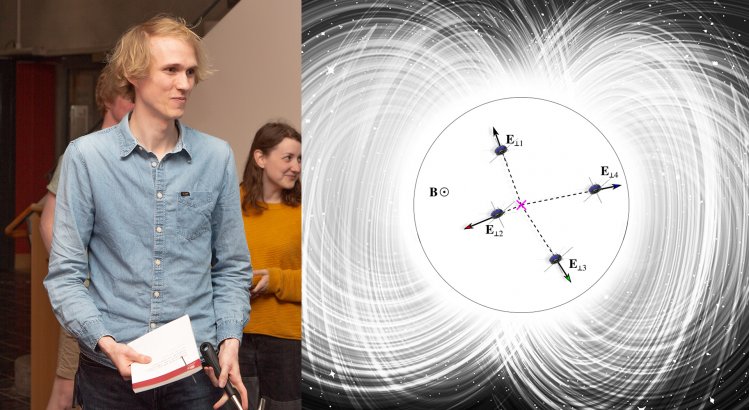 In the doctoral thesis that Konrad Steinvall, Swedish Institute of Space Physics and Uppsala University, presents on June 8, new results are presented on how waves in electrically charged gas, space plasma, interact with the plasma itself in connection with an explosive process called magnetic reconnection. The process is connected to both solar storms and aurora.

The thesis is based on analysis of measurements from NASA’s four Magnetospheric Multiscale (MMS) satellites that study the space plasma around Earth, which is surrounded by a magnetic bubble, the magnetosphere. The purpose of MMS is to investigate how the magnetosphere interacts with charged particles from the sun, the solar wind.

Magnetic reconnection is an important plasma process that, among other things, connects the Earth’s magnetic field with the solar wind and the reconnection finally leads to aurora being able to occur. It is also a key process in other contexts. For example, reconnection is the source behind coronal mass ejections from the sun, and in fusion reactors, reconnection can lead to the reactor being destabilized and cooled.

A key question that Konrad has focused on is the extent to which plasma waves affect magnetic reconnection. In a space plasma, the total electric charge is often zero. The number of negative electrons is the same as the number of positive ions. When energy is supplied to the plasma, waves can be formed where this charge balance is broken. A particularly important example of such a type of wave is electron holes. An electron hole is a small area in the plasma where electrons are missing.

Scientists have long suspected that electron holes may play an important role in magnetic reconnection, but it has not been possible to measure before.

“Thanks to MMS’s advanced instruments and the fact that the satellites fly close together, I have been able to study electron holes in more detail than has been possible before. Among other things, I have proven that electron holes formed in connection with magnetic reconnection can radiate another type of plasma wave, which in turn has the potential to affect how fast the reconnection process takes place”, says Konrad Steinvall.

Konrad Steinvall defends the thesis entitled “Electrostatic waves associated with collisionless magnetic reconnection” at 10.15 at the Ångström Laboratory in Uppsala. The opponent is Professor Jonathan Rae from Northumbria University, UK.

Link to the doctoral thesis