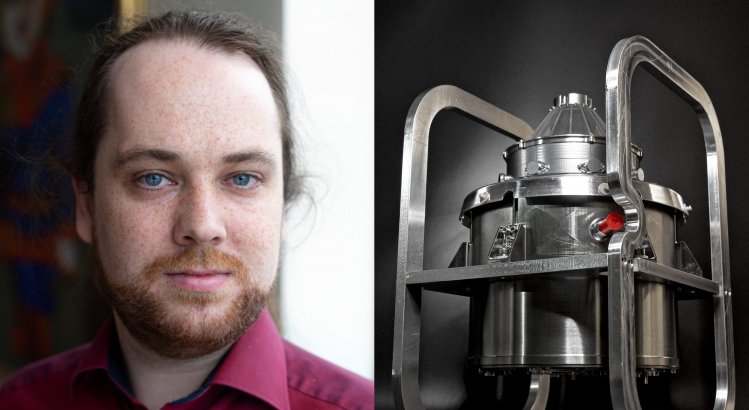 On May 13th Philipp Wittmann, Swedish Institute of Space Physics (IRF) and Umeå University, will defend his doctoral thesis. Philipp has been part of developing, testing, and calibrating the particle instrument Jovian plasma Dynamics and Composition analyzer (JDC). It will measure ions and electrons in the Jovian system onboard the upcoming European spacecraft JUpiter ICy moons Explorer (JUICE).

The JUICE spacecraft will be launched in 2023 towards Jupiter and the main scientific goal of the mission is to study the habitability of Europa, Ganymede, and Callisto, three of the four Galilean moons. The particle instrument JDC will contribute to this study by measuring ion and electron fluxes, their dynamics and the different types of ions present in the Jovian system.

“The uniqueness of JDC is a combination of a very compact sensor design and the capability to measure not only positive but also negative ions with the same instrument. I worked on four different versions of the instrument including the unit selected to fly to Jupiter,” says Philipp.

Philipp’s work included the implementation of design changes for improved instrument ventilation, the design and implementation of electronic boards, integration of the different versions of JDC, surface treatments and a variety of environmental tests. He also calibrated both the flight unit and the flight spare unit.

To make sure that JDC’s detectors can handle the number of particles accumulated during the whole mission at Jupiter, Philipp implemented a lifetime test for the detectors.

JDC is, together with five other instruments, a part of the Particle Environment Package (PEP), one of the two Swedish payloads of the JUpiter ICy moons Explorer.

Philipp Wittmann, born in Germany, defends his PhD thesis titled “The Jovian Plasma Dynamics and Composition Analyzer (JDC) for ESA’s JUICE mission” on Friday the 13th of May 2022 in the auditorium at IRF in Kiruna. The faculty opponent is Dr Frédéric Allegrini from the Soutwest Research Institute in the USA.