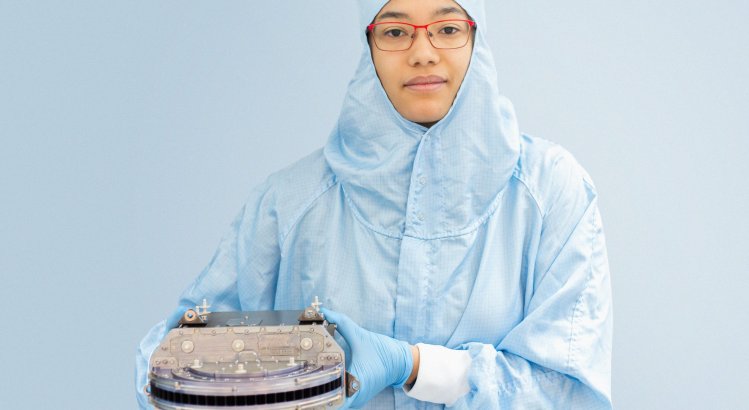 On 25 March, Angèle Pontoni, Swedish Institute of Space Physics (IRF) and Umeå University, will defend her doctoral thesis. Angèle has contributed to the development, testing, calibration and validation of the Jovian Neutrals Analyzer, a particle instrument part of the upcoming JUICE mission for the Jovian system.

The instrument will fly onboard the European Space Agency spacecraft JUpiter ICy moons Explorer that will be launched in 2023. The scientific goals of the mission are to study the Jovian system with a particular focus on the three large icy moons Europa, Ganymede and Callisto. Another target is the Io torus, which is a donut-shaped structure consisting of energetic particles originating from volcanic eruptions on Jupiter’s active moon Io.

Every instrument sent into space has to be tailored for the specific environment in which it will operate. Measurements in the Jovian system are particularly challenging because of the harsh radiation environment. To suppress the noise induced by radiation, JNA had to be equipped with heavy tungsten shields and a special type of detector was selected.

“Building instruments for space is very challenging. After launch, there’s no way for us to fix any design mistakes, so we have to put our instrument through many testing campaigns, to make sure it will work in space”, says Angèle.

Most of Angèle’s PhD was spent in the lab, building, testing, and calibrating the instrument. She has actively been developing and testing five different versions of the instrument, including the one that is now mounted on the spacecraft. One of her first tasks was to build a simplified version of JNA to demonstrate its electrical design. Angèle also worked on the computer simulation to predict the particle environment at Ganymede, which is crucial to interpret what the instrument will observe.

The instrument will be the first one ever to use the neutral particle imaging technique to study how charged particles flow around Jupiter and how they interact with Ganymede’s surface.

“The different brightness at different locations on the surface of Ganymede is believed to be due to particle precipitation. JNA measures the neutrals that are ejected from the surface by the impacting particles, and gives us an image of the precipitation pattern. In a similar way the instrument can map the Io torus by measuring neutral particles, without having to pass close to Io where radiation would damage the spacecraft.”

Angèle Pontoni, born in France, defends her thesis Development and simulated observations of the Jovian Neutrals Analyzer in the auditorium at IRF in Kiruna, Sweden, on Friday 25 March. The faculty opponent is Prof. Andrew Yau from the University of Calgary in Canada.