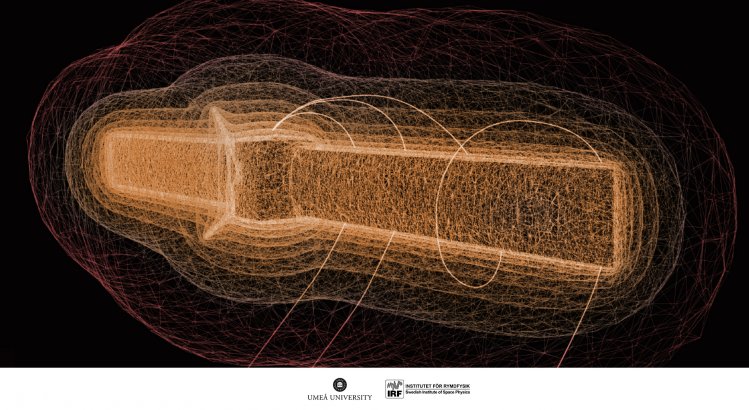 Sofia Bergman, Swedish Institute of Space Physics (IRF) and Umeå University, will defend her doctoral thesis on low-energy ions around comet 67P/Churyumov-Gerasimenko on 26 November. Observing low energy ions is notoriously difficult because their properties are affected greatly by the spacecraft which observes them. Sofia has developed new methods to do this. Using her work, scientists can study low-energy ions around comets and in a variety of other places in the Solar System.

Comets have an environment of plasma which contains a large number of ions with low energies. It is necessary to understand these low-energy ions’ properties in order to understand the physical processes occurring around the comet. As low-energy ions are difficult to measure Sofia Bergman devised a new method to analyze measurements of these ions around comet 67P/Churyumov-Gerasimenko in her thesis.

In the thesis, data from IRF’s ion mass spectrometer ICA (Ion Composition Analyzer) on board Rosetta have been analysed. ICA can measure the energy and travel direction of ions with very low energies, but because of the influence of the spacecraft potential on the measurements the low-energy data from ICA have previously been difficult to interpret.

“For the first time, we have now been able to determine the flow directions of low-energy ions observed by ICA at comet 67P/Churyumov-Gerasimenko”, Sofia Bergman says. “The results were surprising. We see a large amount of ions flowing inward towards the comet nucleus, instead of outward as we had expected.”

Comets are interesting to study when we want to understand how the solar wind is interacting with different bodies in the Solar System. The comets’ elliptical orbits cause the environment around them to change dramatically. As the distance from the comet to the Sun changes, we can observe how a magnetosphere is being formed around the comet. Low-energy ions are important for this interaction and not only at comets:

“The method that I have developed in my thesis can also be used to study low-energy ions around other bodies in the Solar System. The analysis of such ions has previously been very limited due to the difficulties of interpreting the measurements”, says Sofia Bergman.

Sofia Bergman, who was born and raised in Borlänge, Sweden, defends her thesis “Low-Energy Ions Around Comet 67P/Churyumov-Gerasimenko” in Ljusårssalen at IRF in Kiruna, Sweden, on Friday 26 November at 9:00. The opponent is Prof Stein Håland from Max-Planck Institute for Solar System Research, Göttingen, Germany and Birkeland Centre for Space Science, University of Bergen, Norway and the University Centre in Svalbard, Longyearbyen, Norway.