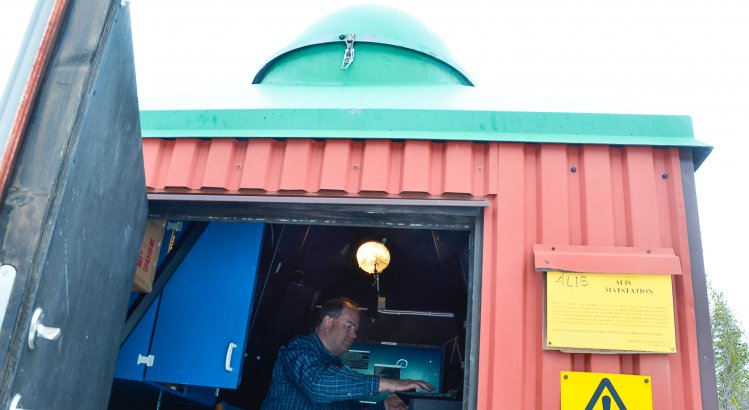 ALIS_4D: the unique measurement system for studies of the northern lights

IRF’s scientist Urban Brändström and the engineers Daria Mikhaylova and Lars-Göran Vanhainen recently visited the measuring station in Silkkimuotka, located in the forest near Nedre Soppero in Kiruna municipality.

– At the moment we have measuring stations at Esrange Space Center, in Kiruna, Abisko, Tjautjas and here in Silkkimuotka. By having a distance between the measuring stations, we get an overlap of the field of views so that we can do tomography of the northern lights, to see it in three dimensions. This is important for better understanding the physics of space close to us, the so-called ionosphere that starts at an altitude of about 100 kilometers, and how we can, for example, better protect ourselves against space weather events, says Urban Brändström.

The measurement system ALIS_4D is the successor to the ALIS (Auroral Large Imaging System) which was established in the early 90s. The previous system could not measure as fast as the current system and was not as light sensitive. Nowadays, the cameras’ sensors have better technology that can enable measurements in significantly higher time resolution.

– This system will be used together with the large radar system EISCAT_3D which is an ionospheric radar to better understand plasma physics.

The cameras in the measurement system ALIS_4D take images with high time resolution and provide information about a certain wavelength (color) of the northern lights which are caused by the  interaction between a particle (electron or proton) hitting an atom or molecule in the ionosphere. Scientists are interested in measuring how much light comes from each 3D-pixel (so called voxel). Thanks to the overlapping field of view, tomographic reconstruction of the northern lights is possible.

– Imagine computer tomography of the brain. The mathematics is similar, and means that it is possible to get exact information about light (photons) from a specific volume element (voxel) you have chosen to look at. This in turn can give us scientists detailed information about the incident particles that cause the northern lights. Information that we can compare with the measurements that are made by satellites and radar systems such as EISCAT_3D, says Urban Brändström.

Video from measurment with ALIS_4D (September 2020).