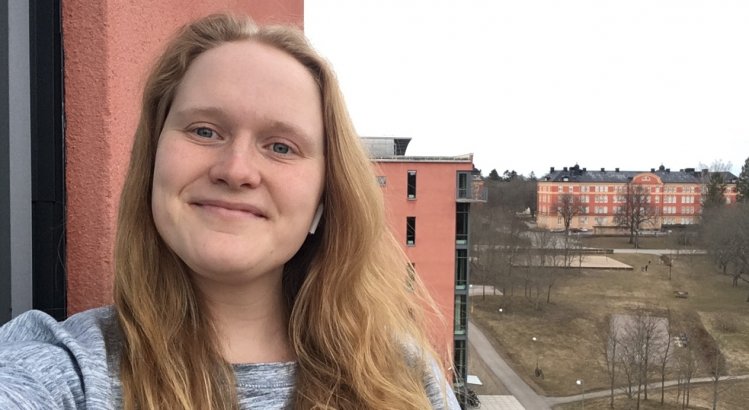 In February, 25-year-old Ida Svenningsson from Lund started as a doctoral student at IRF’s office in Uppsala. She most recently came from studies at Chalmers University of Technology.

What will your doctoral studies be about?
I will mainly use observed data from MMS (Magnetospheric Multiscale Mission), a spacecraft that since 2015 orbits Earth in a large elliptical orbit and measures, among other things, magnetic and electric fields with high time resolution.

The area I focus on is the Earth’s magnetosheath, which lies between the bow shock, the shock wave in front of the Earth that slows down the solar wind (charged particles from the sun) and the magnetosphere. It consists of compressed and heated solar wind and can be very turbulent.

My project is about electron heating. I will investigate various physical processes associated with it, such as wave particle interactions, plasma instabilities, and magnetic reconnection. For example, it has been found that magnetic reconnection – when magnetic field lines are broken up and magnetic energy is converted into ion and electron motion – can be associated to heating in turbulent plasmas. Exactly how this happens is not completely understood, however, and that is something I will try to find out.

Where does your interest in space come from?
I have not had a special interest in space. My interest has been in the physics. I got into plasma physics when I wrote my Master thesis, which was about nuclear fusion (a way of harvesting energy by fusing two hydrogen nuclei to form helium)and runaway electrons. These electrons, which move close to the speed of light,can form in tokamaks (a type of fusion generator where the hot plasma is confined by magnetic fields) and cause great damage to the walls and components of the machine. Fusion plasma has both similarities and major differences with space plasma; the basic physics is the same, but conditions such as length scales, density and temperature are completely different.

The interest in space is something that will grow over time. If you delve into a topic in depth, it’s hard not to get interested. And space is quite large, to say the least, which bodes well!

What have you studied before and where?
I studied Engineering Physics for five years at Chalmers University of Technology in Gothenburg. In my fourth year, I also did an exchange year at the École Polytechnique in Montreal, as part of my Master’s in Applied Physics.

How did you get in touch with IRF and the doctoral position you have now started?
The examiner for my Master thesis knew that the position was advertised, and when I was applying for various doctoral positions, she told me about it. I applied and got a good impression during the job interview. I also went on recommendations and found the topic interesting and relevant to me.

What are your expectations and what are your dreams and goals for the future?
Right now I am looking forward and hoping to learn a lot about my new research topic. I learn new things all the time and it is challenging but above all very fun. I also want to learn how to be a good researcher, and develop the skills that come with it. Hopefully I will continue with research after my doctoral studies, but in what form it will be, I have a few years to think about.

Finally, I am very much looking forward to getting to know my new colleagues, IRF, and Uppsala!

Together with the Alvén Laboratory at the Royal Institute of Technology (KTH), IRF in Uppsala is responsible for sensor surfaces and test equipment for the SDP/FIELDS instrument, which measures electric fields and is led by the University of New Hampshire, USA.
For more information about Magnetospheric MultiScale – MMS