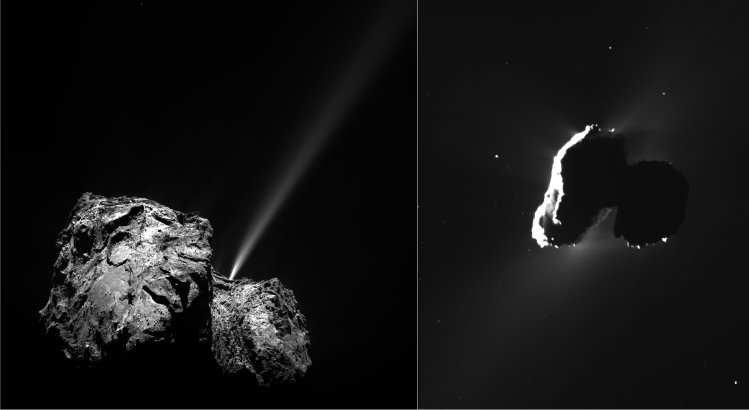 On the 15th of January, Fredrik Leffe Johansson of the Swedish Institute of Space Physics (IRF) and Uppsala University, defends his Ph.D. thesis, which attempts to explain why the smallest dust grains near comet 67P were absent.

The dissertation, titled Rosetta Observations of Plasma and Dust at Comet 67P, is based on data analysis of measurements made by the Langmuir Probe instrument, made by IRF Uppsala, on the European Space Agency’s spacecraft Rosetta. From 2014 to 2016, the spacecraft monitored the environment of a comet in more detail than ever made before.

The Langmuir Probe can be likened with a “Space weather station”, capable of measuring densities, temperatures, electric fields and wind speeds of electrically charged particles (plasma), around comet 67P.

With an improved analysis method, Fredrik was able to use the instrument to measure the intensity of the ultraviolet (UV) light. He discovered that only half of the UV-light from the sun reaches through the dust cloud that surrounds the comet nucleus. Apart from the comet tail(s), it is this dust cloud that we see when we observe a comet on the night sky. The discovery does not fully agree with the otherwise puzzling dust measurements made on Rosetta, which primarily finds large dust grains, in amounts that cannot substantially affect the UV-light.

The explanation presented in the thesis relies on larger dust grains eroding to many smaller grains shortly after being expelled by the comet. At great distances from the cometary nucleus we can therefore expect large amounts of smaller grains, that efficiently absorb and scatter UV light before it reaches Rosetta

”The absence of cometary dust grains of the smallest sizes was one of the most unexpected results from the dust grain measurements on Rosetta. However, with some detective work, we realized how that could be. This result yields a new understanding of the dust the cometary nucleus is made of, and of the environment the comet was formed in, a few billion years ago”, Fredrik explains.

The dissertation also covers an investigation of disturbances with measurements made by the Langmuir Probe. In this rather unique environment, the Rosetta spacecraft was unexpectedly negatively charged. It turns out that this significant spacecraft charging depending on intricate details of the Rosetta solar panels. When Fredrik revealed the spacecraft charging behaviour in detail, this disturbance was used to probe fast variations of the cometary plasma, which could not have been probed by any other means.

”I’ve learned how not to design spacecraft for similar environments, but also how to use a problem to our advantage. Hopefully, I’ve also managed to explain why the dust of comet 67P seemed so different from other comets”, Fredrik adds.

The dissertation is to be publicly examined online on Friday 15 January 2021 at 13:15. The faculty examiner is Dr Nicolas André of IRAP (Toulouse, France).