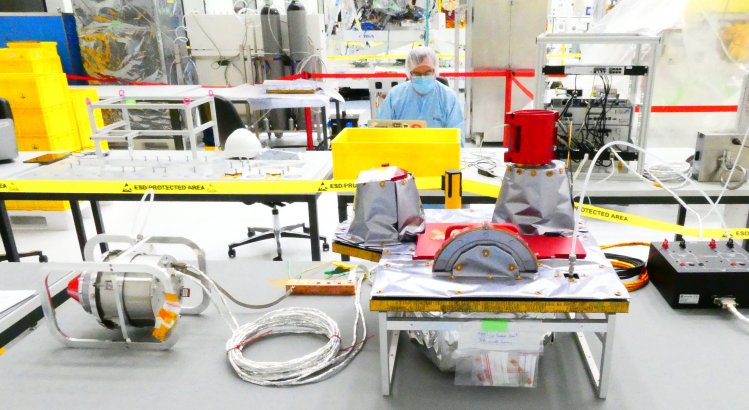 Swedish space instrument participates in the search for life around Jupiter

The Swedish-led satellite instrument Particle Environment Package (PEP) will help researchers at the Swedish Institute of Space Physics (IRF) to understand how three of Jupiter’s icy moons are affected by the particles around Jupiter and search for the pre-conditions for life. After 14 years of work, the instrument is ready to take its place on ESA’s Jupiter spacecraft JUICE.

Prof. Stas Barbash is the Principal Investigator for the instrument Particle Environment Package (PEP) on board the European Space Agency’s spacecraft JUICE (JUpiter ICy moons Explorer). The instrument is the most advanced that IRF has so far constructed and consists of six sensors, two of which have been developed and built at the IRF head office in Kiruna.

The instrument will measure particles around Jupiter and the three icy moons Europa, Callisto and Ganymede and thus contribute to the large puzzle that needs to be put together to understand the complex Jupiter system.

“Icy moons are the most exciting objects in the solar system to study. The dream would of course be to discover a small crack in the ice on the moon Europa through which water from the sea under the ice squirts out. Maybe it’s a favorable environment for life under the ice? To fly through the cloud of steam, measure in it and succeed in identifying some kind of trace of life. That would of course be fantastic “, says Stas Barabash.

One of the major challenges for the engineers and scientists who built PEP has been to develop sensors that can perform measurements in an environment that, due to Jupiter’s enormous magnetic field, has the strongest radiation in the solar system.

“The radiation doses to which the instrument is exposed can be compared to being in the middle of a collapsed Chernobyl reactor for a short time. Sweden delivers an instrument that not only has to get to this extreme space environment, but also survive in it to provide researchers with unique data “, says Stas Barabash.

For IRF, it is a unique situation that ESA has selected one country and one institute to deliver two of a total of ten instruments on JUICE. IRF’s Uppsala office is responsible for the second instrument.

Eleven countries in Europe, the USA and Japan contribute to PEP. JUICE will be launched from French Guiana in June 2022 on board an Ariane-5 rocket. In 2033, the project will end with the spacecraft crashing on the surface of the moon Ganymede.

The work with PEP is done with funding from the Swedish National Space Agency.