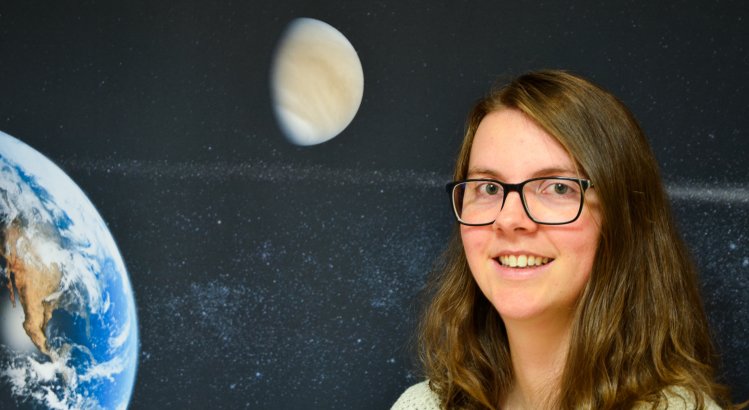 On 13 November Moa Persson, Swedish Institute of Space Physics (IRF) and Umeå University, will defend her doctoral thesis. Her thesis shows that only a small part of the historical water content on Venus has been lost to space over the past 4 billion years. This is much less than researchers previously thought.

The thesis is built on analyses of how the solar wind, a stream of charged particles from the Sun, affects the Venusian atmosphere and causes atmospheric particles to escape to space. Moa Persson has analysed data from IRF’s space instrument ASPERA-4, on board the European Space Agency’s space mission Venus Express.

“The surface of Venus today is comparable to hell. It is extremely dry and has a temperature of 460 degrees but historically the surface was more hospitable with a wealth of water that could reach a depth of several hundreds of metres if spread equally over the surface. This water has disappeared from Venus. My thesis shows that only a few decimetres of this water has escaped to space”, says Moa Persson.

The studies are based on measurements of ions (charged particles) in the vicinity of Venus. On average two protons escape from the atmosphere for every one oxygen ion. This indicates a loss of water. Variations in the solar wind and the solar radiation affect how many ions escape.

“In my thesis I have calculated how much water has escaped from Venus in the past. I have looked at how the ion escape is affected by the solar wind variations today and how the solar wind has changed over time”, says Moa Persson.

The results of the thesis can be compared to similar studies of Mars and Earth. The comparisons between the three sibling planets give a more comprehensive picture of the solar wind effects on planetary atmospheres. For example Earth, with its strong magnetic field, has a larger loss of atmosphere to space than both Venus and Mars.

“I hope further comparisons will be done of the atmospheric losses of Venus, Earth and Mars. This is especially interesting now that signs of life may have been found on Venus”, says Moa Persson.

Moa Persson, who was raised in Skövde, Sweden, defends her thesis “Escape to Space or Return to Venus: Ion Flows Measured by Venus Express” in the auditorium at IRF in Kiruna, Sweden, on Friday 13 November. The faculty opponent is Dr Dmitrij Titov from ESTEC/ESA in Noordwijk, The Netherlands.