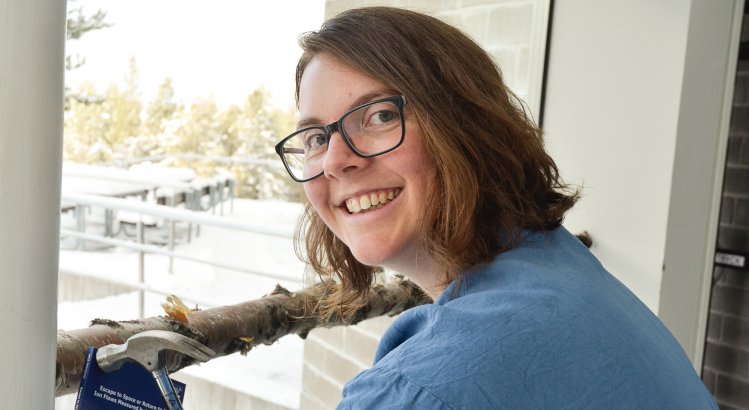 On Friday, Moa Persson nailed her doctoral thesis “Escape to Space or Return to Venus: Ion Flows Measured by Venus Express”. She has also received the award for best student poster at a virtual competition during the Europlanet Science Congress (EPSC).

Moa Persson has implemented her doctoral thesis at the Swedish Institute of Space Physics and Umeå University under the supervision of Associate Professor Yoshifumi Futaana.

On November 13 13, 09.00, Moa Persson will defend her doctoral thesis in the auditorium at the Space Campus in Kiruna.

The award for best student poster was presented during the annual Europlanet Science Congress (EPSC). The competition includes bachelors, masters and PhD students. The conference usually changes places every year, but due to Covid19 it was virtual this year and lasted between the period 21 September and 9 October.

The poster”Global Venus-solar wind coupling and oxygen ion escape” contains research results that show that Venus’ atmosphere is believed to have had a large amount of water on its surface for a long time, but that the atmosphere is now dry.

The intention of the Europlanet Science Congress 2020 is to cover a broad area of science topics related to planetary science and planetary missions.

Moa Persson on the award and having nailed her thesis after four years:

“For me as a PhD student he award means that I get noticed for my research and that I have done a good job of presenting my research visually and that my research is seen as important, unique and good. It feels great! Nailing the thesis was a relief. Now I am waiting to defend it as well”, she says.