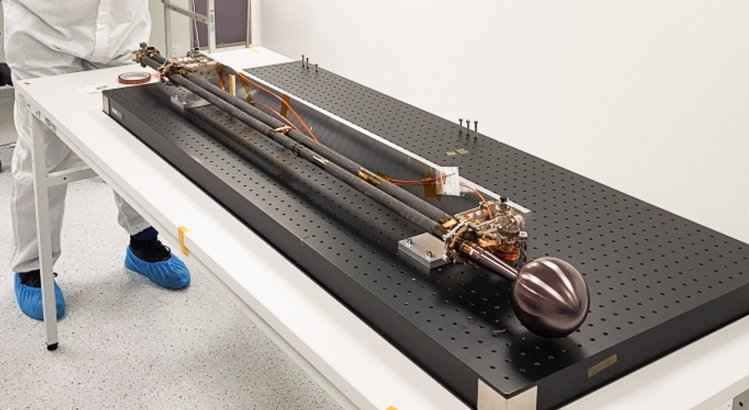 Now the first of two Swedish-led Jupiter instruments has left the Swedish Institute of Space Physics (IRF) to take its place on the European spacecraft JUICE. The Radio & Plasma Wave Investigation instrument (RPWI) will measure electric and magnetic fields to identify and map the oceans beneath the frozen ice cover of the moon Ganymede.

In 2013, IRF was selected by the European Space Agency (ESA) to participate in one of their largest projects in planetary exploration. Since then, Sweden and IRF have been responsible for two of then instruments on board JUICE (JUpiter ICy moons Explorer). In 2022, the spacecraft will be sent to Jupiter and the Galilean moons Europa, Ganymede and Callisto, three moons with oceans beneath their thick ice sheets.

“The instrument is designed to investigate, in particular, how Jupiter’s magnetosphere interacts with the atmospheres of the icy moons. We primarily hope to identify and map how Ganymede’s ocean flows under the ice sheet and what processes keep it going. With RPWI, we will not be able to detect any life in the oceans, but where there is liquid water, there are opportunities for life,” says Jan-Erik Wahlund.

RPWI will contribute to the mapping of Jupiter’s and Ganymede’s entire magnetospheres. The scientists hope to get more information about how the moons work in detail, but also to study, for example, radio radiation emitted from Jupiter’s surroundings.

In addition, JUICE will be the first spacecraft ever to orbit around the giant planet’s largest moon, Ganymede. The scientists know that the moon’s own magnetic field generates strong electric fields that give rise to, among other things, aurora particles.

IRF researcher Jan Bergman is pleased to be a part of space science and space technology which will place Sweden, with instrumental and scientific contributions from many other countries, in another part of the solar system.

“Amazing people of all nationalities have contributed. Everyone at RPWI is very proud of this melting pot of international professionalism”, says Jan Bergman.

RPWI has instrument contributions from nine institutions in five countries (Sweden, France, Czech Republic, Poland and Japan), and controbutions from severals companies (eg RUAG, SSC, ÅAC Microtec, Meisei, Astronika and PZL) plus scientific support from 20 institutions in eight countries (those above and Germany, Austria and the UK). ESA itself also supports several significant contributions. The spacecraft is made by Airbus.

JUICE will be launched on an Ariane-5 rocket from French Guiana in 2022. The journey will take eight years.