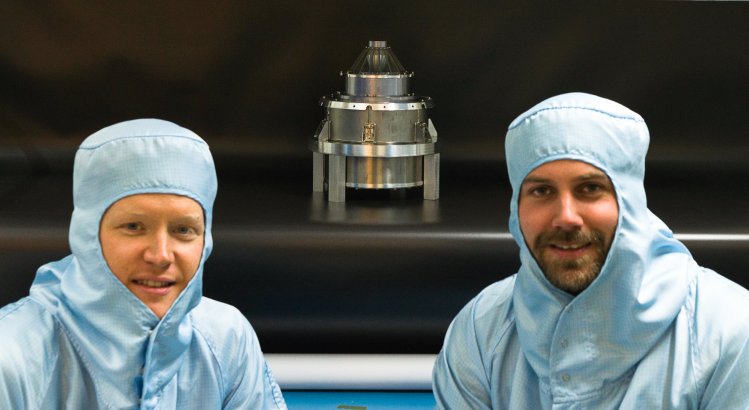 Today, a simpler version of the Jupiter sensor Jovian plasma Dynamics and Composition Analyzer (JDC) has been sent from Kiruna to Stockholm for mechanical tests.

The model is called Structural and Thermal Model (STM) and is both mechanical and thermal representative to be able to fit onto the JUICE (JUpiter ICy moons Explorer) spacecraft. Its power consumption and thermal dissipation are similar with the protoflight model.

Many of the tests performed on the spacecraft do not concern individual sensors or instruments, but they are required to be mounted during the tests. A STM could for example replace the protoflight model during thermal tests in vacuum.

The picture above shows Rikard Ottemark and Joakim Peterson, both research engineers, together with JDC in the middle.
Photo: Philipp Wittmann, IRF

Created by Annelie Klint Nilsson at 2020-04-28
Last modified by Rick McGregor at 2020-05-05
This website uses cookies to improve your experience. We'll assume you're ok with this, but you can opt-out if you wish. Accept Read on
Cookies Policy