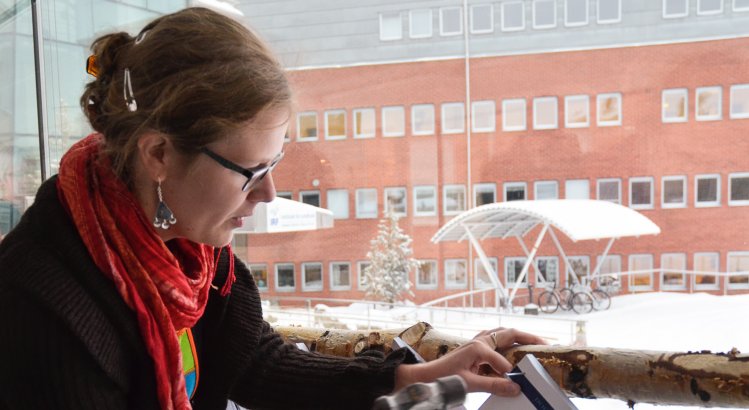 Magnetic storms – a window to the past

Audrey Schillings recently defended her doctoral thesis about atmospheric loss from Earth and how it varies with solar wind conditions. Audrey was employed at the Swedish Institute of Space Physics and enrolled at Luleå University of Technology as a member of its Graduate School in Space Technology.

In the thesis, Audrey Schillings shows how oxygen ion outflow increases with increasing solar wind dynamic pressure, with southward direction of the interplanetary magnetic field and with the amount of extreme ultraviolet radiation. During magnetic storms the oxygen ion outflow could increase with up to 100 times the quiet time value. Data and models show that the observed ions will leave the atmosphere of Earth and be lost into space.

The studies are based on data from the European Space Agency’s satellite constellation Cluster, which consists of four spacecraft flying in formation. The primary data is from the ion sensor Cluster Ion Spectrometer, built and developed in Toulouse.

The uppermost layers of the atmosphere of Earth are subject to extreme ultraviolet radiation and energetic particle bombardment from space, both of which knock off electrons from atoms and molecules, making them electrically charged ions. Electrically charged ions are affected by both magnetic and electric fields. The fields can accelerate the particles so that they overcome gravity and can escape into space. They are in particular affected by the solar wind, a stream of charged particles emanating from the Sun, which carries with it electric and magnetic fields. They are also affected by the magnetic field of planet Earth, which in turn affects the solar wind and creates a bubble in the solar wind – the Earth’s magnetosphere.

The atmospheric outflow through ions has been studied since the 1960s, but many details have remained unclear. The role of the strong planetary magnetic field is one such factor, when compared to unmagnetized planets like Mars or Venus. It has been thought that the magnetic field protects the atmosphere of Earth from the solar wind, and may even guide escaping particles back to the atmosphere. Another related question concerns outflow during geomagnetic storms.

“Magnetic storms are driven by processes on the Sun,” explains Audrey. “They lead to increased inflow of particles and energy into the magnetosphere of Earth. They are particularly interesting, as it is believed that they are representative of the conditions of the ancient solar system, when the Sun was young about 4 billion years ago. Earth, Mars and Venus do not lose much of their atmosphere now, but maybe it was different in the past?”

Magnetic storms do not happen very often, so they contribute rather little to the total data set. At the same time, the magnetosphere of Earth is big, so it matters a lot where the spacecraft happened to be in the magnetosphere during a storm.

“My first task was to develop a new method to look at the relative change of the ion outflow in the part of the magnetosphere where the spacecraft were located. We found that the ion outflow could increase almost a hundredfold during a storm,” says Audrey.

The next step was to study how the outflow from Earth varied with solar wind conditions in a manner similar to how this had been studied for Mars in other recent research. The Mars study indicated that outflow during storms, and thus in the past, was likely lower than now. Thus we have reason to question the picture that the magnetic field of Earth protects the atmosphere. The processes we study become more efficient when the strong planetary magnetic field helps to collect energy from the solar wind and channel it to the atmosphere.

“Our study of how the outflow increases during storms gives an insight into how much atmosphere may be lost from a newly formed planet. Possibly it also shows that a planetary magnetic field may help to remove atmosphere from a planet. This was a surprising discovery,” says Audrey.

Audrey defended her thesis at the Swedish Institute of Space Physics in Kiruna on November 15, 2019. The faculty opponent was Dr Christopher M. Cully of the University of Calgary, Canada.