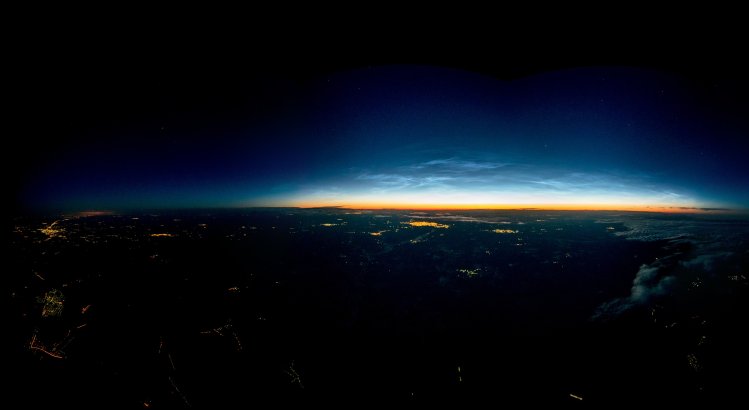 Observations of noctilucent clouds from a stratospheric balloon

The experimental campaign Stratospheric Observations of Noctilucent Clouds (SONC) was conducted on the night of 5-6 July 2018 with the aim of photographing noctilucent clouds (NLC) and studying their large-scale spatial dynamics at scales of 100-1600 kilometres. Noctilucent clouds form as ice particles in the summer mesosphere at heights of 80-85 kilometres, and exhibit large wave structures. Atmospheric scientists at the Swedish Institute of Space Physics (IRF) study these waves and the formation processes of the clouds.

An automated high-resolution camera (equipped with a wide-angle lens) was lifted by a sounding balloon to 21 km altitude above the Moscow region in Russia, taking several hundreds of NLC images during the flight.

“By using images from a balloon-borne camera, we hope to better understand large-scale wave processes at the summer mesopause such as gravity waves, planetary waves and solar tides,” says Peter Dalin, scientist at IRF in Kiruna.

The NLC camera was stabilized using a 3-axis motorized gimbal stabilized platform designed and built by the Moscow Aerospace Laboratory (nearspace.ru). This is the first time such a balloon-borne observation of NLC from the stratosphere has been conducted, making it possible to register and image NLC at large distances. The flight data are at present being analysed.

Noctilucent clouds photographed from a balloon above the Moscow area in July 2018 (Photo: Moscow Aerospace Laboratory)