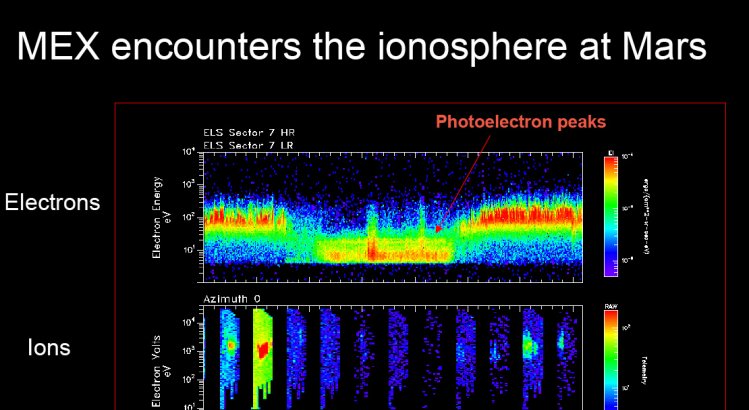 On 2 June the European Space Agency’s spacecraft Mars Express was launched on a Soyuz-Fregat rocket from Baikonur in Kazakhstan. On board Mars Express is the Swedish instrument ASPERA-3, developed at the Swedish Institute of Space Physics (IRF) in Kiruna in cooperation with 15 scientific groups from 10 countries. After a six-month journey Mars Express satellite was successfully inserted into an orbit around Mars on 25 December 2004.

The ASPERA-3 instrument provides information about how charged particles from the sun (the solar wind) influence the upper atmosphere of Mars and how they can have affected its atmospheric evolution through the planet’s history.

The spacecraft and instrument are still going through the commissioning phase but ASPERA-3 has begun scientific operations. All five of the instrument’s sensors are functioning as expected and performing investigations of the Martian environment. A few totally unexpected findings have already been made.

ASPERA-3 is equipped with a detector which can measure atoms moving with very high velocities (hundreds of km/s–compare with 1/2-1 km/s for atoms in gas under room temperature). At Mars, ASPERA-3 has detected extremely high flows of such atoms flying away from the planet’s upper atmosphere. They are hydrogen and most probably originate from the solar wind, a stream of ionized hydrogen flowing from the Sun.

Mars lacks a magnetic field and the solar wind can directly impact on its upper atmosphere. Part of the solar wind’s ionized hydrogen is neutralized and scattered back but most of the particles hit the atmosphere. If what we see is indeed this process, Mars experiences a huge inflow of matter and energy from the solar wind, and this must have affected its atmosphere throughout its planetary evolution. This is the first time this sort of sensor has been flown to another planet and these results are very surprising.

We can see how the solar wind is stripping away the Martian atmosphere in the form of ionized particles. The ASPERA-3 charged particle detector clearly detects the “planetary wind” induced by the solar wind and consisting of molecular ions, oxygen and hydrogen. Such a process taking place for billions of years can easily remove a substantial amount of the oxygen present on the planet in form of water.

However to determine exactly how much oxygen (water) the planet loses per second, long-term observations will be needed to sample different regions around the planet.

For the first time scientists can perform direct measurements in the Martian upper ionosphere, the uppermost layer of the atmosphere (and consisting of ionized gases). ASPERA-3 can clearly identify electrons released from the breaking apart of gas molecules in the Martian atmosphere, mostly CO2. This allows us to determine the precise composition of the Martian ionosphere and further clarify how the solar wind interacts with it.

On March 17-19 some 25 of the scientists from Europe, USA and Japan who are involved in the ASPERA-3 experiment will gather in Kiruna to discuss the results of the first scientific results and to plan for further scientific investigations.