Electron Cooling in a Cometary Coma

The ESA Rosetta spacecraft investigated comet 67P/Churyumov-Gerasimenko during two years from August 2014 to the end of September 2016. The dual Langmuir probe was used to measure plasma parameters including the thermal energy of the electrons. The observed thermal energy (or temperature) of the electrons was rather high, in the range 5-10 eV almost throughout the mission. However, near perihelion the Langmuir probe measurements indicated the prevalence of two electron populations with distinct temperatures, one hot (5-10 eV) and one cold (less than 1 eV). It has been hypothesized that the electrons of the colder population were formed relatively close to the nucleus and that they subsequently cooled by inelastic collisions with the neutral gas. In this project work we develop a model for studying electron cooling in a cometary coma. The model takes into account collisions with water molecules as well as the influence of a radial ambipolar electric field. 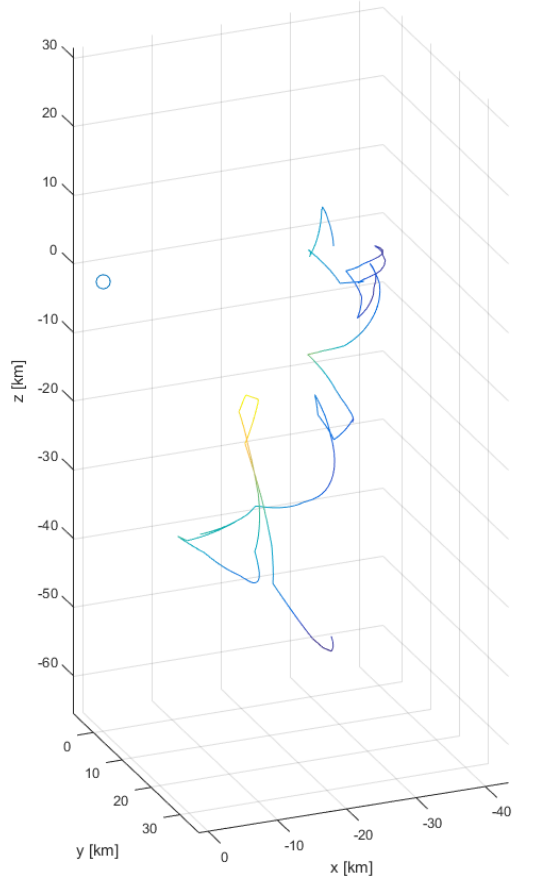 Left: ESA’s comet hunter Rosetta, with the two Langmuir probes from IRF Uppsala at the end of the booms protruding from the spacecraft. Each probe is a sphere of 50 mm diameter. [Background image credit: ESA]
Right: Example path of an electron near the cometary nucleus (blue cirecle), including collisions with the molecules in the coma gas (mainly water vapour).